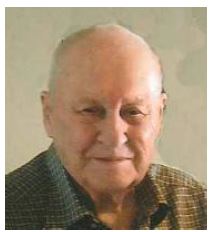 Virgil Chester Norcutt was born November 14, 1925 in Tracy, MN to Chester and Hattie (Otto) Norcutt. He attended school through the 10th grade then graduated from Redwood Falls High School in 2005. Virgil was drafted into the U.S. Army on February 18, 1944. He served in France and Germany during World War II and received the Purple Heart, 3 bronze battle stars, the Legion of Honor award, the Good Conduct medal, the Victory medal, the American Theater ribbon, the Army of Occupation medal, the World War II Victory medal, and the European-African- Middle Eastern Theater ribbon. Virgil was honorably discharged on May 5, 1946 and was united in marriage to Anna Mae Fox on May, 5, 1951. The couple moved to Sanborn in the mid-50’s where Virgil worked for Fox Feed for 28 years. He then worked for L and S Construction until his retirement in the late 80’s. Virgil enjoyed woodworking, hunting, fishing on Cass Lake, and flower gardening, and attained his pilot’s license in 1947.

He is survived by his wife Anna Mae; children- Kenyon (Pam) Norcutt of Waconia, Pam (Tom) Schafer of Springfield, Lisa (Kevin) Pfeffer of Savage, and Randy (Brenda) Norcutt of Hutchinson; 12 grandchildren; 18 great-grandchildren and 1 on the way; sister-in-law Olga Norcutt of Redwood Falls; and sister Ruth (John) Logan of Richfield. He was preceded in death by his parents; grandson Ryan Norcutt; and brother LaVerne..