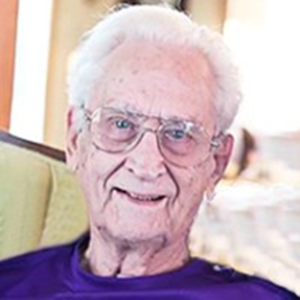 Dahlberg, Melvin John William This man was a true hero. He signed up to serve his country as an 18-year old in World War II in 1943 and received 2 purple hearts as a paratrooper in the 517th Airborne Division Regimental Combat Team. One of the things he would share about enlisting in the Army was wanting to see some action, and he did. He faced fear straight in the face, and lived to tell about it. In all of his adventures, he just never stopped going. He loved being around people, talking, sharing and serving others whenever needed. He married Mae Kathleen (Nelson) Dahlberg, who preceded him in death only 5 days before him on July 1, 2019. Mel passed away on July 6, 2019, on what would have been their 73rd wedding anniversary at Central Health Care in Le Center, Minnesota. Born on August 30, 1924 in St. Paul, Minnesota to Thyra and Nels Dahlberg, Mel was an only child. Mel and Mae are survived by their only daughter, Mary McCracken (husband Jim), grandchildren April (Chuck) Wichterman, Marie (John) McKowen, Philip (Megan) McCracken & Veronica McCracken and great-grandchildren Madeline, Rose, Robbie, Ian and Clara. Funeral service Sunday, July 14th, 2019 7:00 PM @ City Hill Church, 12901 Roberts Drive, Eden Prairie, MN. Visitation 1 hour prior to the service at the church. Interment at Fort Snelling National Cemetery. washburn.mcreavy.com Eden Prairie Chapel 952-975-0400