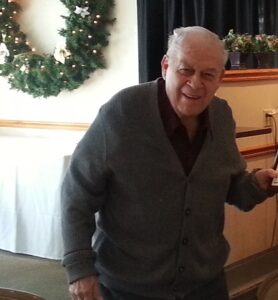 Beloved Husband, Father, Grandfather and Great-Grandfather Age 94, of St. Paul, passed away on March 26, 2020. “Gene” was a World War II Veteran and had been active in the Military Order of the Purple Heart. He was preceded in death by his beloved wife of 54 years, Shirley; siblings, Gerald, Stanley, Anita Baldwin and Rosemary Fangel. Survived by loving family: wife, Patricia (Bray); children, Mary Gail (Michael) Burns, Eugene Jr. (Therese); grandchildren, Sean (Mollie) Kane, Anne (Ryan) Seaton, John (Katelyn), Andrew, Sarah and Michael Capistrant; great-grand children, Samantha and William Kane, Broden and Hadley Seaton. Also survived by many beloved nieces and nephews. Due to the current health crisis the Funeral Mass and the burial will be planned for a future date.   ~ Published in Pioneer Press on Apr. 5, 2020.

Patriot Gene Capistrant was a former Commander of Chapter 5, and a survivor of the Battle of the Bulge under General Patton.  Gene was very outspoken regarding Veteran issues and his many years of support to the Organization.

At this time, all funeral plans are on hold due to the Corona 19 pandemic. I will contact Cmdr Bild and get the taps report made out and sent out.