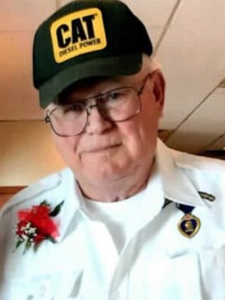 A Mass of Christian Burial will held on July 10, 2020 at 11:00 a.m. at St. Christopher’s Catholic Church in Nisswa. A visitation will be on Thursday, July 9th from 5-7 p.m. at the church and for one hour prior to services on Friday. Interment will be at Minnesota State Veterans Cemetery, Little Falls.

Ed was born August 14th, 1944, in Brainerd to Leslie (Bud) Peck and Lila Terrion. After school he joined the U.S. Merchant Marines until he was drafted by the US Army in the Vietnam War with the Delta unit and was a recipient of the purple heart for being wounded in combat. Ed was a truck driver and worked as a heavy equipment operator for the IUOE Local 49. He was a member of the Military Order of the Purple Heart, DAV, American Legion, VFW, and National Order of Trench Rats. In his retirement years he enjoyed time on his hobby farm and hunting. He will be missed dearly by his family and friends.

Memorials can be given to the Military Order of the Purple Heart or local food shelves in the community.

Arrangements have been completed by Nelson-Doran Funeral Home, Brainerd.