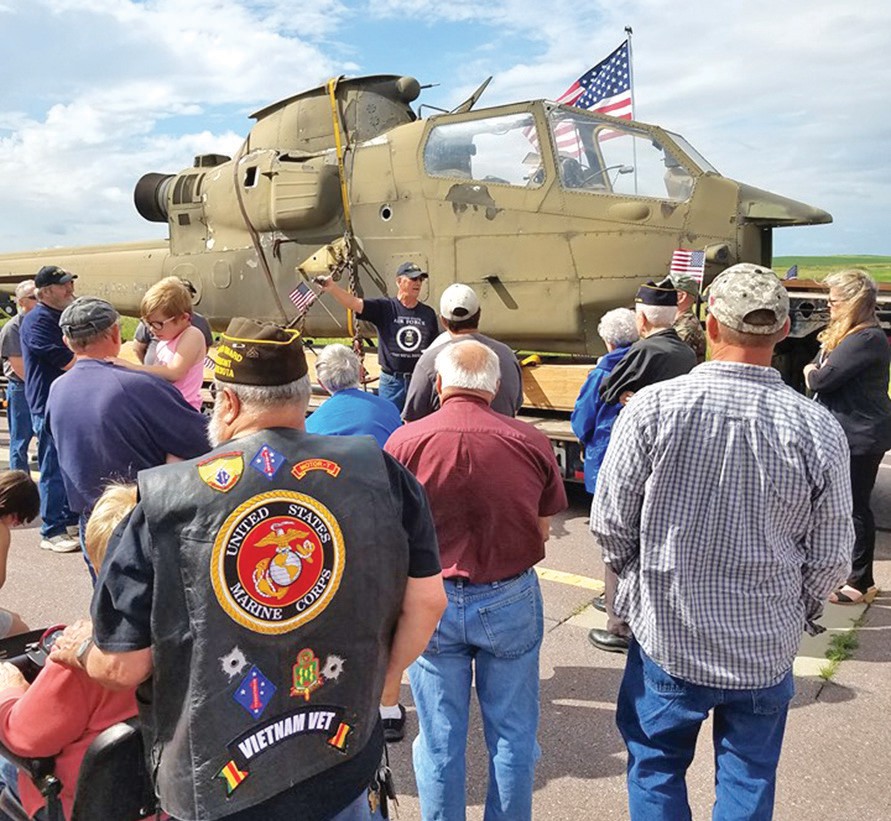 It is no small feat to secure a retired helicopter from the United States Government. After several months of trying and an estimated 30-40 phone calls to people and institutions across the United States, including the Smithsonian, Martin County Veterans Memorial (MCVM) committee member Steve Chase finally nailed down the possibility of obtaining a Cobra helicopter for the memorial.

The dedicated committee of volunteers heading up the MCVM have a vision they’ve been working steadily toward for the past three and a half years, and part of that vision includes a helicopter on the north side of the memorial park. A Cobra from the Vietnam War was their first choice.

Chase is a Vietnam veteran himself, and, as MCVM chairman Jim Miller put it, the committee knew Chase could “find the right contacts” to help them secure a chopper.

When Chase finally spoke with a repre­sentative from the Federal Surplus Proper­ty Program in Minnesota, he hit the jack­pot. The Kern County Fire Department in California was upgrading from a 1966 Co­bra chopper they’d been using. The chop­per being retired had been used in big fires such as the Thomas Fire in Santa Barbara, CA in December 2017. “Underneath you’ll see an arc where it’s all charred,” Chase said. “It almost looks like they tried to sit down on a fire somewhere.”

While the good news was that Chase had found a Cobra, the bad news was that Martin County (the state of Minnesota) wasn’t the only place that wanted it. Also vying for the chopper were Texas, Cali­fornia, Wyoming, and Indiana.

“We wrote our paperwork up the best we could using the material from the [MCVM website]. The pictures of it and how much involvement they had was important,” Chase said. “Another factor that was important was a lot of veteran support,” which the committee could show by the number of veterans looking to be included on the memorial.

“Indiana had more veterans than us,” Chase noted. “We were worried that’s where it might go.” In the end, however, “We were the successful party to receive it.”

The commission received word on June 9 that the Cobra would be coming to Mar­tin County. On Thursday, June 13, Chase was able to get all of the necessary pa­perwork done for the transaction. The following Monday, June 17, the commit­tee needed to provide information on who would be shipping the chopper so the Federal GSA could draw up a manifest for the Cobra to be removed from govern­ment property. The group had 14 days to pick it up or the Cobra would go to one of the other states.

Thankfully the committee had Larry Baarts of Baarts Trucking working with them to move the chopper. On June 19, Chase got a call from Baarts. “I was out fishing with my grandchildren on the lake and Larry said You have to be in Cal­ifornia tomorrow, on the 20th, if we want it.” Due to the size of the bird, a lengthy double drop trailer was required to move it. Chase said, despite it being his grand­son’s birthday, he pulled in his boat and dumped their fish—much to his grand­son’s dismay—and caught a late flight out to California.

“I’d made calls to contacts out in Cal­ifornia who were helicopter experts and they assisted me in loading it. I had a crew of 10 people on a recovery team I put together over the phone while making my trip out to California. It was amazing. They all pitched in.” Chase said it took eight hours to tear down the side wings and necessary parts and package every­thing up to make the Cobra ready for transportation.

On top of working in the desert heat, Chase said the ground had plen­ty of thorny sand burr plants, as well as snakes. “The crew really worked hard out there.” He said another crew of people even came and volunteered their time when they heard the chopper was going to a veterans memorial. The wings went on the trailer first, with the chopper go­ing on after.

After the Cobra was all ready for ship­ment, Chase had to get back to Minne­sota to sign acceptance papers for it. He drove back from Tehachapi, caught a red- eye flight out of Los Angeles and arrived back in Minnesota at 8:00 a.m. where his wife picked up him up at the airport. “In three days I got three hours of sleep and we did it. It was just amazing.”

After traveling approximately 1,800 miles, the helicopter arrived in Fairmont around 9:30 a.m. on Monday, June 24.

While the memorial is intended to hon­or all veterans, the Vietnam Cobra will hold a special place in the hearts of some.

“Well this is a sign of like, ‘Welcome home, veterans.’ The Vietnam veterans never had a welcome home, and this rep­resents it to some of them,” Chase said in an interview with KEYC.

While Chase did much of the legwork to get the Cobra to Martin County, ul­timately its acquisition, and the entire memorial, is the result of numerous peo­ple working together. In the welcoming ceremony for the chopper, Miller stated that since the beginning of this project, there is now in place at the memorial site, located at 507 Winnebago Ave. a red granite entrance sign, 70’ flag-pole, and 15’ x 25’ US flag flying on it. There is also a black granite V-shaped wall with over 600 engraved veteran names, and the names of 86 veterans who were killed in action, serving our county since WWI.

GSA federal requirements state that the Cobra must be cleaned up and on public display within 12 months. It will now be up to the committee to decide how to paint the helicopter.

Miller also stated that even though this Cobra was acquired for free through gov­ernment surplus, nothing is really free. Administration fees and transportation alone cost the committee over $10,000. The group will also need experienced mechanics or other persons of expertise who have worked on helicopters or air­craft in order to get the Cobra cleaned up, put back together and ready for display.

The MCVM continues to look for dona­tions and supporters, through both cash and in-kind donations. Contributions over $500 will be recognized on the black granite sponsor wall at memorial site and donations which are specifically desig­nated to the Cobra installation will be recognized.