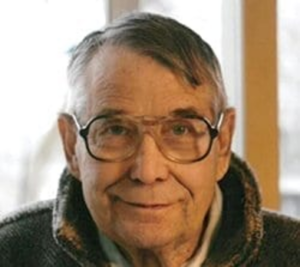 CORCORAN, Minn. — Paul E. Mohr, 87, of Corcoran, went home to heaven on Thursday, March 30, 2017.
Paul was born March 25, 1930, in Watertown, Wisconsin. He was active in softball, football, tumbling and diving prior to graduating from Watertown High School. He served our country in the Korean War and was awarded the Purple Heart with cluster. He married Vivian Evans on May 11, 1957. He became an electrician and had many diverse hobbies, some of which included building wood duck houses, fishing, gardening, growing dahlias and creating games and inventions. He and his family volunteered in the jungle in Peru with Wycliffe Bible Translators for nine months. Services were held in Maple Grove and at Fort Snelling National Cemetery. – From ADS

Thank you to Paul Mohr for sharing his invention for transporting blooms in vases. Paul brings blooms from his garden to his church. Paul used a peach crate and 1/2 inch dowel rods cut and glued into the top of the crate. Paul loved the “Christmas Game” white elephant exchange at the MDS December general meeting. He even built a fun Ring Toss game. 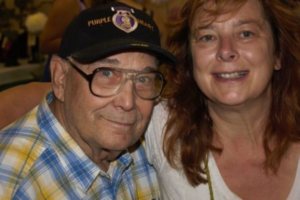