▪ Seventy-seven years ago today, 16 Dec 1943, the B-17 called Lonesome Polecat II departed the main runway at Horham Airfield, UK as part of 631 other aircraft as part of a large 8th Air Force mission to destroy the submarine construction facilities near Bremen, Germany. These large subs had caused great havoc and death in the North Atlantic Ocean, sinking many ships and killing thousands of crew, soldiers, and others. On board were 10 young Americans on their first combat mission in WWII:

• They had been under intensive training for over a year and had already risked great danger, but this was their first combat mission in WWII. Yes, they knew of the extreme danger that lay ahead of them, as they had read all the newspaper articles and had been on base for over 6 weeks in training and witnessed one of their 95th B-17s crashing and killing all 10 crew just after takeoff from their runway. And they had watched day after day the missing aircrafts and empty beds that never returned from their missions and the shot-up crew members taken off some aircraft. When asked if they were scarred, four of the survivors told me “no”, but they were very excited and just focused on their mission ahead! What happened to them on that 16 Dec 1943 winters day over Germany and The Netherlands was absolutely horrendous as nearly all were injured, several badly, and three paid the ultimate sacrifice.

▪ Charlie Schreiner summed it up in an amazing letter he wrote just after the end of the war, when pilot Fred Delbern’s heartbroken wife Geri asked him to write to her everything he could remember about the mission and what happened to Fred (the love of her life, and that love never ended as she told me on her 100th birthday a few years ago). Here is Charlies remarkable statement about his crewmates:

“Our entire crew was strongly attached to Freddie. Each man in the crew admired, respected and loved Fred in a man’s way . . . Del always treated every man in the crew equally and with consideration. As a plane commander he could not be beat and as a pilot he was aces. Us guys should know because we lived and breathed flying together. Del often said to other pilots that he felt plenty lucky that he had a crew of competent men.

When the showdown came, we gave our best. Personally, I feel confident every man in our crew was qualified to carry his job through to the end without question or hesitation. Our ten men fought splendidly as a team and I am proud that I had the privilege to fight side by side with such swell guys. Under desperate combat conditions you find exactly what men are made of—and that is why I feel as strongly as I do about my crewmates.” 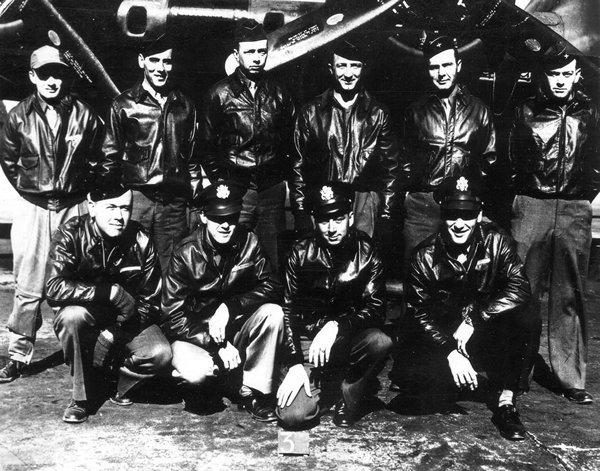 My Journey:  My brother S/Sgt. Eugene Darter flew me (a 4-month-old baby) around our home on a pillow and then flew off to Europe and a bloody air-war against the Nazis. Two months later a telegram was received that he was shot down and had vanished (e.g., MIA) on his first combat mission over Germany. For years, I was told that he was still alive and would come home anytime. Then late one night in 2000, my fingers typed “B-17” into Yahoo Search and suddenly there appeared many stories of people searching for their MIA fathers, brothers, and grandfathers. My magical fingers wasted no time and in record speed wrote several emails to promising sources asking for help to locate my MIA brother. Within a couple of days, I knew that his name (and Fred Delbern’s name) were engraved on the Wall of Missing at the American Cambridge Cemetery in the UK (was even sent a photo). Next, that his B-17 (from the 95th BG) had crashed near a Dutch island in the North Sea called Texel! Shockingly, the names of the 10 crew members were included and my magical fingers again quickly located phone numbers for a couple of crewmembers.

Imagine, those same fingers then dialed one of the numbers and a woman answered and I asked if crewmate “Doral Hupp” who flew in WWII lived there? “You’re in luck” Winnie Hupp said, he is sitting right here on the sofa! An equally shocked Doral spent the next two hours telling me how he found Eugene in a pool of blood on the floor of the Radio Room and that he had lost a one-on-one machine gun battle with an attacking ME109 Nazi fighter. Doral stopped his bleeding and got him up and put his parachute on him and watched as he bailed out into total fog below just before he and other crewmembers bailed. Hearing all this, I was totally overcome with emotion.

I immediately launched (Feb 2000) an extensive cold-case search that took 14 years and lots of travel and help from family, 95th BG veterans, and many others to find out what happened to Eugene and two other MIA crewmates. My cold-case search discovered 4 surviving crewmembers with firsthand knowledge, the son of crewmate Ed Woolen (shockingly, John Woolen and I suddenly discovered that we were engineering classmates at the University of Texas), and the wives of three others! It seemed like almost weekly there were discoveries at the National Archives II, at the old Horham AFB, UK and on Texel Island, NL. Several discoveries were simply beyond belief, as one newspaper headlined a “Message From Beyond” when pieces of the Lonesome Polecat II B-17 were actually found on the Texel beach after a big North Sea storm, just days before a long planned memorial in 2007 for the 3 MIAs on Texel! But the BIG discovery for me and my family was a then 17-year-old Dutch boy (Cornelius Ellen) who was walking along the dike on Texel Island on that fateful 16 Dec 1943 winters day who told us what he witnessed when an American Airman came down through the fog 60 years prior and described his final moments as “Gone With The Wind”. Please see www.gonewiththewindhesaid.com for more of this exciting story and mystery.

On 19 January, I visited Texel dike with subfreezing temperatures, fog, and wind and quickly understood that Eugene could not survive for only a few minutes in these conditions. I also gave my DNA to the Dutch Maritime Police for their large database of MIA individuals found around the Wadden Sea and North Sea where there are still human remains being identified. Huge thanks to many, many individuals and organizations in the US, the UK, and the NL for their help in this very cold-case search. The story of these 10 young Americans and others deserves to be told and never forgotten. We in part owe our freedom today to the sacrifices of these nearly 30,000 forever young US and 55,000 UK Airmen who died in the air war over Europe in WWII! 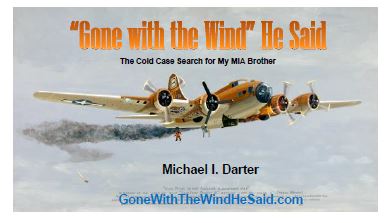 The Cold Case Search for My MIA Brother
Michael I. Darter
GoneWithTheWindHeSaid.com