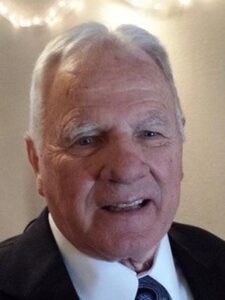 Walter O. Iverson, Jr., 88 of Duluth passed away on Friday, January 22nd, 2021 in his home of natural causes with family at his side.

His gentle loving ways, positive attitude and strong work ethic were the model and inspiration to his family. He was a kind, hardworking perfectionist and these qualities endeared him to many who would call on him for help. He was especially happy when spending time with his children, grandchildren and great grandchildren.

He graduated from Duluth Central in 1950 and was on the football and hockey teams. In the fall after his graduation and as a Marine Corps Reservist with Company B in Duluth, he found himself in the Korean War. He received two Purple Hearts in this conflict and was a proud member of The Chosin Few. Upon his return to the States, he married his high school sweetheart, Carol, and began a family and a career as a floor coverer for Johnson’s Tile and UMD’s Facilities Management department.

He was very active and enjoyed all things outdoors whether it was cross country skiing, training and participating in Birkiebeiners, playing hockey, bicycling and jogging. His training route often included traipsing off to his brother Marvin’s house 15 miles away. He also liked to fish the local lakes and camping in Voyageurs National Park and BWCA. His favorite time of year was the fall and you could find him and his 410 on logging trails on the lookout for partridge.

Retirement provided him and Carol with the opportunity for RVing to Alaska, Texas and local favorite campgrounds. He reconnected with many old acquaintances during these years providing him with many fun new memories. He continued to immerse himself in his hobbies of woodworking and woodcarving.

Years after Carol’s passing, Walt met and married Jayne Dehnel. She enhanced his life. They traveled, fished, camped and revitalized their home.

He was a member of the VFW, American Legion, Scottish Rite of Freemasonry, Palestine Lodge 79, Lake Avenue Loafers, a lifetime member of DAV and the Purple Heart.

The family would like to thank the heroes at St. Luke’s Hospice for their compassionate and competent care and neighbors Hans and Carrie Newberg for all their help.

In lieu of flowers, the family request any memorials to go to St. Luke’s Hospice, 220 North 6th Ave. East, Duluth 55805. A celebration of his life will be held at Kenwood Lutheran Church in the summer. Arrangements by Cremation Society of Minnesota.