WHEREAS, the people of the city of Goodhue have great admiration and the utmost gratitude for all of the women and men who have selflessly served their country and this community in the U.S. Armed Forces; and

WHEREAS, veterans have paid the high price of freedom by leaving their families and communities and placing themselves in harm’s way for the good of all; and

WHEREAS, the contributions and sacrifices of the women and the men from the city of Goodhue who have served in the Armed Forces have been vital in maintaining the freedoms and the way of life enjoyed by our citizens, and

WHEREAS, many women and men in uniform have given their lives while serving in the Armed Forces; and

WHEREAS, many citizens of our community have earned the Purple Heart Medal as a result of being wounded while engaged in combat with an enemy force, construed as a singularly meritorious act of essential service

NOW, THEREFORE, I, Kerry Bien, Mayor of Goodhue, do hereby proclaim the week of August 23, 2021, officially designated as the week in Goodhue to remember and recognize veterans who are the recipients of the Purple Heart Medal, and furthermore; Goodhue does hereby adopt the standards necessary to be designated a Purple Heart City. 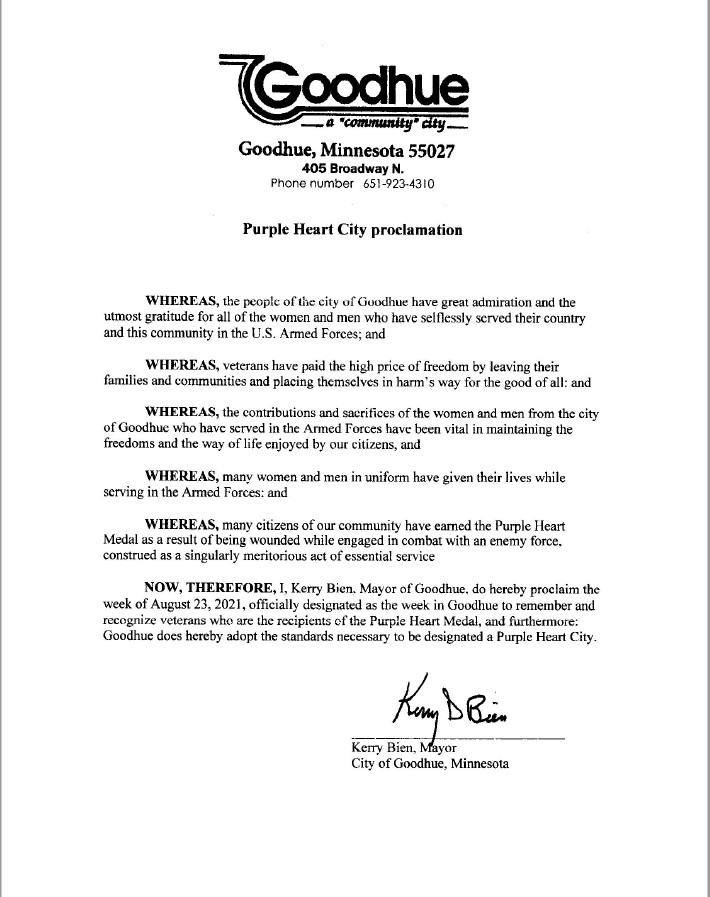